Pepsi Tanzania. Pepsi is a well-known hundred year old brand adored by more than 200 million people worldwide. It is one the biggest selling soft drink brand in Tanzania .Pepsi is universal on any occasion, Teens Love it , Adults love it , 200 million people love it , Everybody loves it ! .There was a formula inventedcentury ago in faraway continent that made Pepsi the foremost selling drinks in Tanzania . In 1886 the US .Caleb Bradman, a man with the idea expressed a hit of a digestive drink and decided to name is Brad’s drink then later on the liquid was known as Pepsi-Cola in 1898 and ultimately it was known as Pepsi 1903.

Since its beginning, Pepsi has always been at the head in the soft drink industry and it came up with many innovative ideas such as Diet Pepsi, 21 bottles, recyclable plastic cola bottles and privileged even in a can.

Pepsi was loved by many youth and youth culture, over generations, Teens have grown up with Pepsi and have shared an expressive attachment with it unlike any other cola brand, Be it parties , hangouts , or just another day at the beach , A day is never complete without having the sparkles of PEPSI!

Pepsi changed the game in 2011 when it became the sponsor of the Cricket World Cup. Change the game gained enormous popularity and created marvelous buzz! Pepsi powered many Football Stars,Cricketers, Bollywood and Hollywood’s stars such Leo Messi,Drogba, MS Dhoni, Deepika Padukone who have all sanctioned with Pepsi since its launch internationally. Pepsi Tanzania 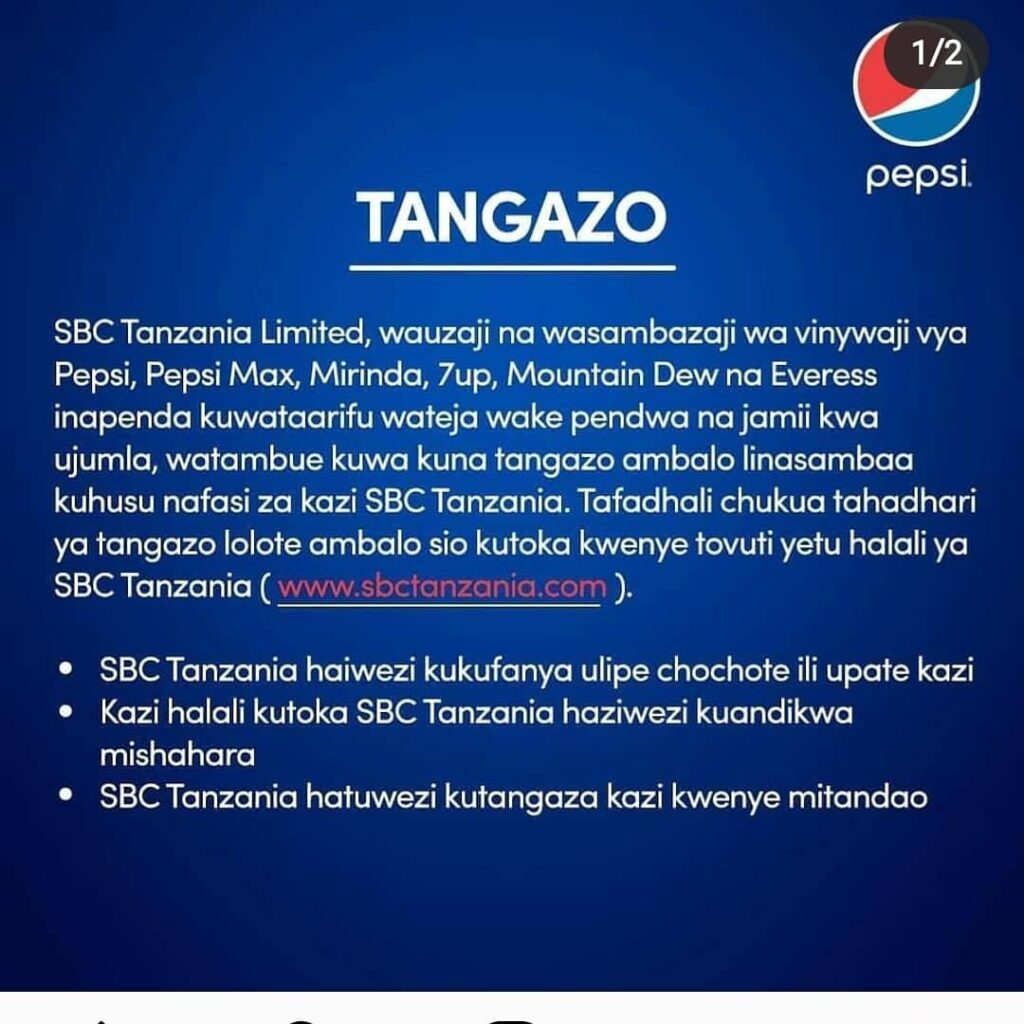 SBC Tanzania Limited, the producer and supplier of Pepsi, Pepsi Max, Mirinda, 7up, Mountain Dew and Everess will like to inform our esteemed customers and the society to be aware of fake jobs advertisement that are currently circulating regarding vacancies at SBC Tanzania. Please beware of any adverts that are not from the official SBC Tanzania website (www.sbctanzania.com).
We, at SBC Tanzania, will never ask you to pay for a job Legitimate SBC Tanzania jobs adverts do not include salary details

We do not advertise vacancies on social media